Happy 2017: Fight against terrorism is won…Hooray to a secured Nigeria

President Muhammadu Buhari was on Friday night hosted by the Guards Brigade Regimental to a dinner where he was presented with the flag recovered from Boko Haram.

He urged the Army to ensure the survival of Nigeria as a geo-political entity despite what he described as “political madness’’ being exhibited in some parts of the nation.

He tasked the soldiers on Friday night when he was being presented with the flag recovered by the Army from Camp Zero in Sambisa forest.

The flag belonging the Boko Haram terrorists was formally was handed over to the President by the Theatre Commander, Operation Lafiya Dole, Maj. -Gen. Lucky Irabor. 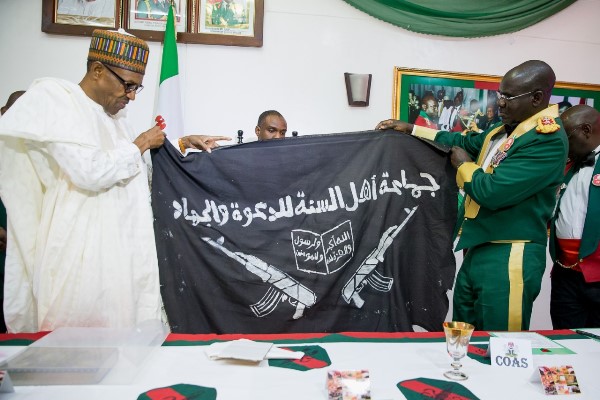 The ceremony took place on Friday night when the President was hosted at the Guards Brigade Regimental Dinner.

According to him, it is duty bound for the army to ensure the sustenance of peaceful co-existence among the over 250 ethnic groups across the country.

“We will do our best to build the national institutions in the country.

“All these political madness in the North East, the Niger Delta or in the East should not be allowed to cause division or any form of tension in the country.’’

He said he was almost killed while on duty even before enjoying his first salary as an officer.

The president, therefore, stated that he was conversant with the problems of the military having spent over 25 years in the military.

He recalled how his refusal to adhere to an advice from the IMF, World Bank to devalue the naira and increase prices of fuel and flour, as a military Head of State, led to his removal.

He said: “I refused and gave my reasons and the next thing I knew I was removed and detained for three and half years.

“As a civilian president I will do my best and I’m telling you all these because you are part of the leadership of this great country and God willing we will remain great.”

In his remarks, the Chief of Army Staff, Gen. Tukur Buratai urged the officers and men of the Guards Brigade to always maintain the courage and discipline they were known for in 2017 and beyond.

He assured that the military would continue their onslaught in the North East, and would not rest in mopping up of the remnants of the Boko Haram insurgents.

Buratai reassured that the Nigerian Army would remain apolitical in carrying out its duties to the nation.

The News Agency of Nigeria (NAN) reports that the regimental dinner night, was organized to mark the end of drilling year of the Presidential Brigade of Guards.

It afforded the officers of the brigade to socialize with their commanders.

The highlight of the occasion was the ‎inauguration of the PMB (President Muhammadu Buhari) Gymnasium at the Scorpion Mess in W.U. Bassey Cantonment by the President.

The event also witnessed the presentation of Souvenirs, Scorpion Magazine and Compendium of Guards Brigade as well as the conducts of the band by the President.

The Commander, Brigade of Guards, Brig.-Gen. Musa Yusuf, delivered the vote of thanks at the occasion which was attended by notable personalities including the representative of Senate President, ‎Sen. Leader, Ali Ndume and the Minister of the Federal Capital Territory, Malam Muhammed Bello.
Others are the National Security Adviser, Service Chiefs‎, the Inspector General of Police Ibrahim Idris, Presidential aides among others.

Serena is engaged to her beau

She is getting hooked to Reddit co-owner Alexis Ohanian.

The 35 year old tennis star broke the news fittingly on Reddit as she travelled to New Zealand.

Williams announced their engagement while she was in the air between Los Angeles and Auckland, where she was due to play the ASB Classic next week.

Williams made the announcement in a poem.

“I came home. A little late. Someone had a bag packed for me. And a carriage waited. Destination: Rome. To escort me to my very own ‘charming.’ Back to where our stars first collided. And now it was full circle. At the same table we first met by chance. But by choice. Down on knee. He said 4 words. And I said yes.”

Williams and Ohanian had been dating for about a year, and were relatively private about their relationship prior to this announcement.

Williams, one of the greatest tennis players of all time and one of the premier athletes in American history, holds 38 Grand Slam titles, including 22 won in singles. Her most recent major victory was at Wimbledon earlier this year.

Ohanian is an entrepreneur, philanthropist, and in-demand speaker.

The couple are yet to announce a wedding date.

Zahra Buhari set to get married to a Billionaire’s son, Ahmed Indimi on Friday, 16 December.

The couple had their prenuptial wedding tea party last night in Abuja.  Other activities like bridal shower and cocktail are some of the events lined up before the actual wedding, which will take place tomorrow.

Traders around the former Jos main market – Terminus, rose this morning with anticipation of yet another business day only to be thrown into a state of fear and confusion.

A team of stern looking security personnel could be seen in strategic positions around the market today, comprising of the Nigerian Police Force, the Nigerian Mobile Police and the Nigeria Security and Civil Defence Corps; in serious operation, dismantling stalls and throwing goods into their trucks.

BC NEWS was informed by the traders that they were not informed of the operation.

A trader, Mrs Chika Mark, who has been selling at this market for about 3 years informed this medium that: “we came this morning to start business as usual and all of a sudden this people came with their trucks and guns and started bringing down our stalls and packing our goods.”

She said they were not given any notice and they were in shock because they were taken unawares. She further said the only time this sort of mayhem befell them was in the last regime “Baba Gyang’s regime”, that was the former governor of the state, Jonah Gyang,  but that  they were given notice.

Another trader Mrs Ify Kalu, said that there was nothing serious, that they just wanted to evacuate illegal shop owners who were selling in open space, but said that the approach was wrong.

Kalu said: “This is not the right time to do it because Christmas is approaching. We just have a few days to Christmas, so this kind of thing should not happen at about this hour.”

Bemoaning their fate, the trader said they felt incapacitated as the operation took them unawares. “We don’t expect this kind of thing to happen, we expect that maybe they should inform the people to do something ; they just came this morning only to find them bringing down the stalls, they did not inform people it is not fair.” She said.

When asked if it was in connection with the proposed renovation of the market which was burned down in 2002, or any security unrest, she said she was not aware of any work going on in the market, but condemned the manner in which the men of the Nigerian security operatives stormed the market, instilling fear on them as some of them thought something sinister such as the horrific ethno-religious crisis that had befallen the state in the past. 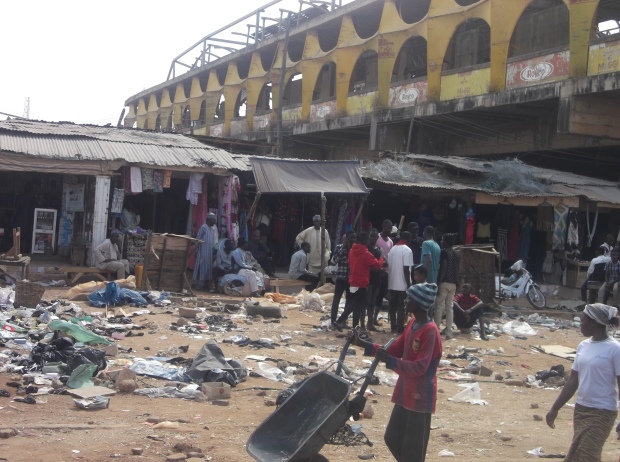 ”This thing can bring us bad market because anybody that sees this kind of thing, would say”an fara”, meaning it is happening. Further explaining, she said: ” you know that language, it is not a good language, once they say ‘an fafa’, it means everybody is running, it means there is crisis, there is no peace, but we don’t want it”.

Another trader who did not disclose his name said there was no prior notice to them before what he described as a siege was carried out on them.

As at the time of filing this report, the security men spoken to said only their Public Relations Officer could speak to us, he was not present.

The Chairman of the Market Union, Alhaji Sabo Adamu, who was later reached on the phone said the raid was done to decongest the market as it was beginning to pose security to commuters.

He said it is necessary that people are able to see both ends of the market.

“The government want to sanitise the area, those outside were asked to relocate inside the market”. he said.

He added that contrary to the claims by the trader that no notice was issued, the market Chairman said security operatives had gone round, two weeks ago, informing the traders of the need to relocate their goods inside the market.

He further said the exercise was necessary as the market is located at the entry point of the city.